How is New Jersey protecting its coastline from flooding?

When it comes to shoring up the state against forces of nature unleashed by climate change, Superstorm Sandy may have put New Jersey ahead of the game. Its catastrophic toll on infrastructure built for the past centuries spurred municipalities and utilities to start building to survive the next century. 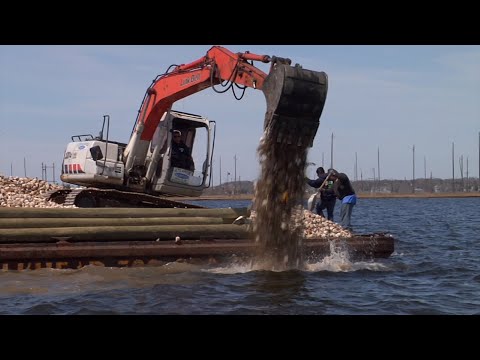 The Salem and Hope Creek Nuclear Plants are considered to be in safe zones.

The Port Authority says its new Terminal One being built at Newark Airport has been engineered following the latest guidelines for sustainability and resiliency.

And Rutgers Institute of Earth, Ocean, and Atmospheric Sciences Director Robert Kopp says the Gateway Project had better include climate change in the specs to replace the train tunnels under the Hudson.

“They’re over 100 years old. They were engineered for a very different climate, a very different sea level and they were severely damaged a century after they were opened by Superstorm Sandy,” said Kopp. “So we would be foolish if we were to build, say, the Gateway Tunnels and not in the engineering specs think about the next 100 years of climate change and engineer for that.”

But all the so-called hard protections — the giant sea walls and tide gates being considered — won’t protect everyone, so communities are considering “soft protections,” enlisting help from nature.

“How do we ensure that we still have tidal marshes there to absorb wave energy? Can we build oyster reefs to absorb some of that energy? So that’s some form of soft protection,” Kopp said.

As is the Army Corps of Engineers’ beach replenishment project that’s added acres of sand along the state’s 127 miles of coastline. Expanding wetlands and marshes to protect coasts from flooding can also improve water quality. Planting more trees can reduce temperatures in urban areas and protect city dwellers from deadly heat waves. Restoring streams to their natural state and removing concrete linings so more water can be carried away during heavy storms can also work.

“This bulkhead here in this park worked,” said Catherine McCabe, commissioner of the Department of Environmental Protection, referring to protections in flood-prone Memorial Park on the Shark River in Neptune City. “I do not know whether that bulkhead that we see out there was there during Sandy, but what I see from the 12-foot inundation maps, which is about what we experienced with Sandy, is that entire peninsula out there would be under water.”

“The federal government has been good to us in giving us the [National] Flood Insurance Program and while we have that program, we’re still able to rebuild. I don’t know how much longer Congress will be funding that program,” McCabe said.

And it’s not clear that every home should be rebuilt.

“If you have a area where a house is getting flooded every couple years, it no longer makes sense for say the flood insurance to pay to rebuild this house every couple of years. Those are the places where we might think about returning land to park land,” said Kopp.

That was the idea behind Gov. Chris Christie’s Blue Acres program, under which the state pays homeowners for their homes so they can move to higher ground. McCabe said she is continuing the program.

“I think the Blue Acres program is one of the best programs New Jersey ever came up with. In fact, it’s fairly well known across the country as being very innovative,” McCabe said.

“Scientific experts can’t come in and just tell you this, right? These are community decisions. So an important part of that process is fostering dialogue and thinking about this collectively,” Kopp said.

And enlisting the government’s help with funding.

“We just gave four, $200,000 grants in a program called Resilient New Jersey to assist municipalities and some of them are, you know, joining together with adjacent municipalities to do planning,” said McCabe.

Among Hudson River towns, the work is already underway.